SAVED from eradication, thanks to multiple pledges of tax breaks, grants and low-interest loans: the jobs of around 200 people working at Stiefel Labs in Oak Hill. The plant had been scheduled for abandonment, following acquisition of the far-flung, privately-owned Stiefel operations last year by the drug colossus GlaxoSmithKline, whose managers then decided to shift its skin care products manufacturing from Oak Hill to Montreal. According to Thursday’s announcement, Glaxo’s bosses now intend to bring the company’s toothpaste production (Aquafresh, Sensodyne) from the present Clifton NJ plant to Oak Hill. They were incited by, among other things, more than $2 million in the way of grants (Federal, State and local, for machinery upgrades, efficiency upgrades, equipment), tax breaks and loans. The prospective job loss figure here, consequently, will be around 60 rather than 260.

POSTPONED: the tax-foreclosure auction of GreeneLand properties that had been scheduled for April 28th. The date was contingent on authorization by the presiding judge, George Pulver Jr, who has not completed the task of going through the file on each property that is nominated by the County Treasurer for takeover. The auctioneer originally anticipated that by March 28th the judicial decision-making would be completed, so that a catalogue of eligible properties, duly described, could be compiled. For updates: www.nysauctions.com.

------Meanwhile, investors with a bit of spare change (in the millions of dollars) could focus their attention on the former Washington Irving Elementary School, which is well along toward conversion into up-scale apartments. It will be auctioned on May 7th on behalf of plaintiff Rhinebeck Savings Bank, which is owed $1.2 million. Alternatively, investors could look to the extensive former Dunns Builders Supply properties on Catskill Creek, or to the nearby Union Mills Lofts (work suspended; new investors wanted), or to the Friar Tuck resort (now closed, heavily encumbered by debt, and in the hands, more or less, of Ulster Savings Bank).

ACQUIRED by Hudson-Catskill Newspaper Corporation, publisher of two mid-Hudson daily newspapers--Daily Mail and Register-Star—and three weeklies—Chatham Courier, Mountain Eagle and Windham Journal: two more weeklies, the Ravena-based News-Herald and the grotesquely named Greene County Local Courier (product of a recent merger two weeklies). Such, at any rate, is the news as provided in 4/8/10 Daily Mail. The Hudson-Catskill Newspaper Corporation is a subsidiary of the privately held Johnson Publishing Corporation, based in Watertown NY. Meanwhile, the Greenville Press remains dormant, if not defunct. And the news-free Mountain Pennysaver persists as a free semi-weekly throwaway packed with advertising (which actually is a kind of news).

ALTERED subtly, by the outcome of March 30’s election: the Catskill Village governing board’s operational character. The election produced the retention of Village President Vincent Seeley (and his immediate return to the presidency, by vote of his fellow trustees) along with the election of Brian Kehoe (Democrat) at the expense of incumbent Angelo Amato (Republican). In a community with 2226 registered voters (909 Republican, 652 Democratic, 667 other), Mr Seeley received 258 votes, Mr Kehoe received 218 and Mr Amato received 172. The departure of Mr Amato (who made a remarkably gracious concession statement, in the 4/10 Daily Mail) takes away from the Board a distinctly independent voice, with a particular sensitivity to the weight of local taxation and hence to the costs of Village operations. The arrival of Mr Kehoe attests to the effectiveness of strenuous campaigning and to receptivity among voters toward a new resident who carries unusual credentials in the field of public administration. All being well, Mr Kehoe will be harnessed by his colleagues to the task of completing the project (sorely needed, as State Comptroller investigators pointed out last year) of putting Village financial management on a sound footing. Mr Kehoe also may prove to be uniquely suitable for exploring—especially with Town Supervisor Peter Markou, another professionally trained public administrator--consolidations of Village and Town services. This work would free Mr Seeley and other Trustees to do more in the way of improving the Village by bringing in more visitors, more transplants, more businesses and, consequently, more revenue.

TRANSPARENCY NEWS. At last Monday’s meeting in the firehouse, the Trustees of Catskill Village approved a commendation for a veteran firefighter, George Lackie. They hosted a discussion of what takes place at Beattie-Powers Place. They discussed and adopted 17 changes in downtown parking regulations. They placed on record letters from three local residents. They accepted bids for work on the water and sewer systems.

------Those acts of governance (including the circulation and/or the reading aloud of selected documents) were performed in front of an audience of 37 persons. Not adopted, however, was a resolve to make those decisions and letters readily accessible to everybody, by the simple expedient of posting them (along with approved audited bills and reports from department heads) on the official web site, www.villageofcatskill.net. It would be so easy to do. It would be such a boon to the cause of transparency.-------

FORESHADOWED for the forthcoming Congressional election in the 20th District of New York (that is, in GreeneLand and nine other counties or parts of counties): campaigning in which the candidates talk past one another. The main candidates will be Scott Murphy, the incumbent, a Democrat who won the office by a hair-thin margin in a special election last year following Kirsten Gillibrand’s elevation to the U.S. Senate, and Chris Gibson, a Kinderhook- based Republican who retired recently from the U.S. Army at the rank of colonel. At a March 31 meeting at the Desmond Hotel in Albany, in a contest with three other candidates, Mr Gibson won the endorsement of the District’s Republican county chairpersons. He characterized his candidacy as “a chance to renew our republic and enact policies that make us feel safe.” Assailing Mr Murphy’s votes in favor of what is generally called “cap-and-trade” and on health care reform, he promised to hammer home a “message of reducing taxes, curbing government spending, eliminating onerous regulations and reducing health care costs.”

------To that compound theme Mr Murphy is altogether likely to respond with a key word: “jobs.” He will embellish that version of priorities with allusions to his experience as a private enterpriser.

BIG SIBLINGS is not the accepted name. But it is the essence of a program that is being developed here, out of an UIster County parent: Adult mentors (“Big Brothers,” “Big Sisters”) for children who have been “impacted by incarceration” (of a parent or care giver). The program connects such kids with adult mentors, who commit to devoting at least 8 hours per month to a chosen little sibling. Jennifer Osswald of Catskill is developing the program here, with some 20 kids signed up as prospects, about a dozen adults as mentors. A fund-raising bowling tournament (or party) will be held on Saturday (4/17) from 7pm at the Hoe Bowl in Catskill. www.bigbrothersbigsistersulster.org.

SATURDAY evening in downtown Catskill will be spiced by, among other things, a "Big Foot Sightings" reception at the Open Studio and, at the M Gallery, an opening reception for Jonas Caulfield pictures adumbrating the theme "Transillumination," as in: 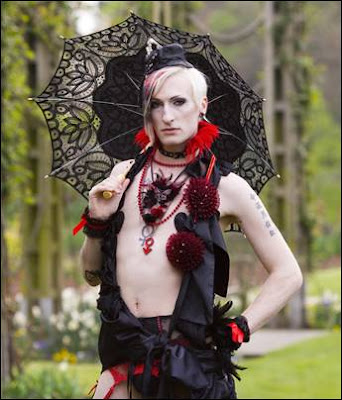