POLARIZING QUESTION, “Hudson’s Valley at 400: Paradise or Paradise Lost?” That question (formally speaking) is used as title of an art exhibition that opens tomorrow at the Athens Cultural Center (works by Susan Bee, Claudia McNulty, Leah Rhodes, Ellen Kozak, Marianne Van Lent; curated by Randall Evans and by Cynthia Karasek, who also made the superb poster). 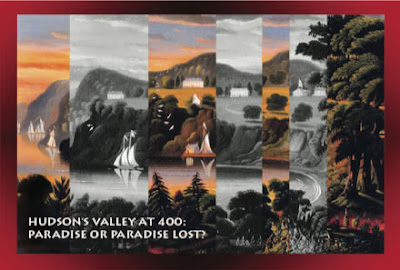 The terms of this either-or question prod respondents to infer that one of the posited alternatives is ‘correct,’ and thus deters variations on ‘neither.’

-----Also remarkable in the advance publicity for the exhibition is a rare feat of mind-reading. “This show,” says the publicist, “hopes to illuminate the palpable tension between wilderness and cultivation that charges this place with its vital current.”

-----BTW: We heartily recommend the show.

FAKE TITLE. “News from the Chiropractor” is the name of a series of articles published in local newspapers. The articles do not offer news (that is, descriptions of recent events). They offer information about health problems, along with therapeutic advice. That advice dwells, every time, on the benefits of chiropractic. It is followed by personal information about the author, including her chiropracticing business address.

PREGNANT QUESTION. “And just what exactly made the witnesses withdraw their testimony that caused the judge's dismissal?” This question (formally speaking), posed by a pseudonymous “Adrien van der Donk,” was offered as a Comment in response to our recent “Doing the News” blog. Its interrogatory form, however, does not signify a request for information. It conveys a suggestion about the likely answer. Something (or someone!) made those witnesses recant, says “Adrien.” Corruption? Bribery? Coercion? Party-political mendacity? Those possibilities come to mind. We are deterred by the pseudo-question’s terms, and by the context of its expression, from contemplating ‘innocent’ explanations. We are deterred from giving credence to the possibility that the witnesses came (with outside help) to believe, correctly, that their first affidavits were wrong.

LEADING QUESTION. “Who are you to tell someone how big their home must be?” That question—immediately preceded by “You set a 1,000 square-foot minimum on manufactured homes”--was voiced recently in an open letter (Daily Mail; Greenville Press) signed by Andrea Macko. The question’s nominal addressee is Peter O’Hara, head of the Greenville Planning Board, leading advocate of Town Council adoption of comprehensive zoning plan and candidate for election as Town Supervisor in a contest with Ms Macko’s uncle. Ms Macko’s question recalls the classic “When did you stop beating your wife?” That question, while being ostensibly addressed to a defendant, is aimed rhetorically at a judge and a jury. While formally soliciting information it rhetorically conveys a factual claim, namely, that the witness has been a wife-beater. In the present case the speaker argues, by means of an accusatory other-directed question, that Mr O’Hara desires authority—presumptuously, impudently—to tell people how big their homes must be. In doing so Ms Macko puts a tendentious interpretation on the fact that included in the comprehensive plan which Mr O’Hara urged the Town Council to adopt was a rule prescribing that manufactured homes be at least 1000 square feet in size.

A suitable question then might be whether such a rule can properly be adopted by the elected community governors. The question that is posed by Ms Macko exemplifies the rhetorical device known as Red Herring.

ABSENT REFERENTS. Ms Macko's long letter opens with an allusion to cdurrent national controversy: "These days it's difficult to turn on the television or open a newspaper without seeing something about government run healthcare. While public opinion surrounding the plan varies, one aspect that remains incontestable is the bottom line: The federal government is seeking to control that which is private. Invited by Ms Macko's italicized words is the inference that the author has identified the thing, the that, that is private. But in fact she hasn't, and doesn't. Could she really be arguing that "healthcare" is a wholly private matter, not suitable for public regulation? If so, then sanitation would be business of governments. Neither would the certification of doctors.

AVOWAL AS ADVOCACY. “I believe in something called the Constitution,” says Ms Macko in the third sentence of her long open letter. Voiced in the context of a pending local election marked by controversy over regulation of property use, that avowal of personal faith serves to suggest that (i) To "believe in...the Constitution" is a readily intelligible posibilit;y; (ii) believing in the so-called Constitution is a topical matter, being relevant perhaps for evaluating candidates; (iii) you too should believe in the Constitution; (iv) some relevant local people probably do not believe in the Constitution. Not provided in the Macko missive, however, is verbiage about what measures, recently adopted or advocated locally, would be antithetical to the Constitution.

PRECEPT AS TOPICAL GUIDELINE. “Social issues cannot be corrected with political solutions,” Ms Macko declares in yet another passage. Voiced in an open letter, in the context of local controversy, that declaration prods respondents to believe that the precept is readily intelligible and is especially applicable to current local matters. Not provided in this long letter, however, is guidance in the form of cases. In the absence of such guidance, readers get nothing but a dose of Glittering Generality.