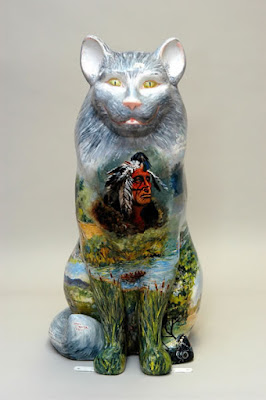 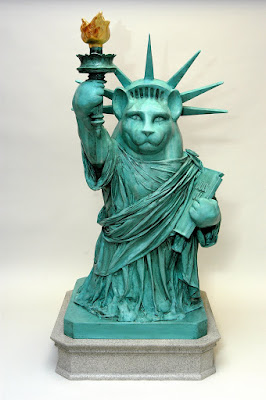 ----"Cat-tue" and "Half Moon" were snagged. along with Cynthia Mulvaney's "Tarrytown, Sleepy Hollow Cat," by scrappy Mike Ferro, for display next Spring at a new creek-side bistro. 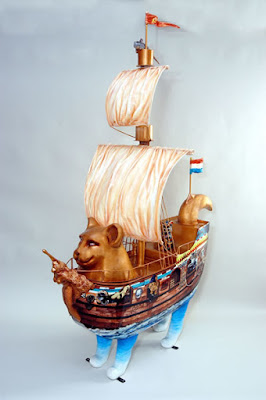 Two of the cats--"Media Luna" by Kico Govantes; "Lights in the Night" by Colorado-based Sabine Baeckmann-Elge -- went to buyers from The Netherlands.

-----For more pictures-- excellent work by photographer Rob Shannon-- go to www.cat-n-around.com, then click Artists 2009. Up will come a full series of cat pictures, plus verbal profiles of their makers. The pictures are small, but a cursor's click yields a larger image.

----The average on bids for the 58 fiberglass felines, reports Chamber of Commerce executive director Linda Overbaugh, was $1370. That figure is down from the previous two years ($1600, $1800) but it yielded $79,200. One fourth of that sum will go to the artists, with the remainder, augmented by sales of posters and other souvenirs. going to worthy local causes.

THE BACKERS. Every cat that went up for auction on Sunday was the product of a design that won sponsorship, at $500, from a local supporter. And every one of the 465 people who attended or staffed Sunday's auction was the beneficiary of sumptuous food contributed by local hosts. Twenty-one establishments (restaurant, resort, bakery, pub, as far away as Leeds and Palenville, with names ranging alphabetically from Ambrosia and Antnony to Village Pizza and Wasana) contributed food. Not among them were three Main Street, Catskill, establishments.

----In addition, one of the Village's three retailers of alcoholic beverages, Catskill Wine Cellar, was sole supplier of the wine that flowed rather freely, since a $5 payment bought a souvenir glass and a no-limit consumption privilege. Meanwhile, huge contributions of hands-on help on Sunday were made by, among other people, Tina Gagliardy (Mahalo Gifts) and Eileen Dees (The Garden Gate).

FROM CATS TO BATS.Mickey Brantley, GreeneLand’s home-grown gift to major league basebal (Seattle Mariners outfielder; New York Mets coach)l, evidently has enlarged his contributions to the game: his son Michael, 22, who was called up last month from his Double-A team to the Cleveland Indians. He is hitting around the .300 mark, and is touted as a hot prospect for center field and lead-off batter next season. (For this tip we are indebted to ex-Catskillian Fred Chetti, who is now a Floridian)

FROM BATS TO BANKS. While many GreeneLanders are unemployed, while property and sales tax revenues are down, while foreclosures are up, while business is slow, GreeneLand's foremost local bank seems to be thriving. In the just-issued annual report of Greene County Bancorp, parent of the Bank of Greene County, President Donald Gibson reports “record earnings, along with strong growth in loans, deposits and capital” for the fiscal year 2009. Net income rose 52 per cent to $4million, thanks mainly to “net income interest” ( the gap between what the bank pays to borrow money and what it receives from loans). Assets rose by 21.3%, lending by 12.4% (to $268 million), deposits by 24% (to $398.7 million), investments by 44% (to $162 milion).

SCAMS DEPT “You send us phones. We send you cash!” “Up to $300 per phone.” “Up to $5 for inkjet cartridges.” That’s the promise trumpeted on the web site www.phoneraiser.com. So GreeneLander Ryan Osswald patiently accumulated a box full of old cell phones (“about 15 of them”) and 40 cartridges, and shipped it off. In due course he received a check: one hundred seventy-five cents.

PENDING ORDINANCE. On Oct. 13, at the Senior Center on Thompson St, Catskill Village’s trustees will hold open discussion on a law prescribing that owners of property fronting on any public street must “cut the grass, weeds, and bushes on the property at such …times as may be necessary…. If the owner fails to do so, Village workers will do it, billing the owner for cost plus $100. Similarly, the trustees will take up law requiring owners of properties abutting public sidewalks to remove snow and ice from those walkways within 24 hours of the end of any storm, and making them liable for any injury arising from failure to act. Again, cost plus $100 fee.

SATURDAY in GreeneLand is replete with attractions. In the mountainous west, it’s History Day in Ashland (from 10am at the fire house) and Autumn Affair time in Windham (http://windhamchamber.org) including a new “Sublim(e)nal Abstraction” show at Windham Fine Arts www.windhamfinearts.org). In Hunter, a full weekend of Oktoberfest will enliven participants at Hunter Mountain (http://huntermtn.org), while in other parts of town, life-sized puppets will perform Prokofiev’s “Peter and the Wolf” (Doctorow Center, 3pm; www.puppets.org ), the Reel Teens film and video festival swings into a second evening (www.realteens.org), singers and stringers (=stringed instrument players) will perform early Latin American music (Doctorow Center) and the Sugar Maples Center of Creative Arts will be enlivened by a day's load of happenings (www.catskillmountain.org). Cairo's weekend harvest festival and craft fair begins tomorrow at the Town Park (http://cairochamberofcommerce.com). In Freehold, the superb Flamenco guitarist Maria Zemantowski will perform, with percussionist Brian Melick, at Ruby’s Hotel (www.rubshotel.com) while East Durham's pubs will resound to the strains of Irish musical participation in a Banjo Burke blast (www.joebanjoburke.org). In Catskill, the farmers' and artisans' market (with music by Paul Slusar) will end at around 1:30pm, just before the start, from Dutchman's Landing, of a morning “Out of Darkness” walk up Main Street, as organized by the county Community Service agency with a view to raising awareness of the nature, incidence and available treatment services for, mental illness. Later in the day, Catskill art galleries and studios welcome visitors. For details: www.catskillgalleryassociation.com . For maps and authorizing buttons, go to the Arts Council building (398 Main St) or the Thomas Cole National Historic Site (218 Spring St).

SUNDAY at Catskill Point, from 11am: The Great Northern Catskills Heritage Festival, “Living the Good Life Locally,” will showcase regional artisans, cultivators and their products, as organized by Cornell Co-Operative Extension (www.agroforestrycenter.org).

---And at 1:30pm, on the south wall of the Warehouse on the Point, the Wall of History will be unveiled. Culminating a project managed by Hudson Talbott, it will showcase representations of aspect of local history, as depicted by Terrance Barrell, Don Boutin, Victoria Brill, James Cramer, Tasha Depp, Patti Ferrara, Edith Marcik, Michelle Moran, Enrico Scull and Daniella Zeman.

This Saturday October 10, the Second Catskill Artists Open Studio Tour will take place, from 12-5, (artists in the village and its surroundings will open their studios to the public) and from 5-8 galleries and other venues will showcase original art and hold receptions, maps will be available. It is open and free to everyone, the studios and galleries combined will show photography, encaustics, sculptures, ceramics, prints, assemblages, oil paintings, drawings, watercolors, installations and other media; an eclectic array brought by your neighbors. It is all original work, you don't have to be art savy to attend, only curious. Everyone is welcome.