BOCKER T. LABRADOODLE, actor, model, therapist and pawthor (Chasing Bocker's Tale) now resides up here, on Superstitious (sic) Drive in the Sleepy Hollow Lake development.  Bocker is not an actual bocker (=beagle/cocker spaniel crossbreed).  Neither is he descended from a once-popular trouser or from an old Dutch settler (knickerbocker).  But this labrador/poodle performer is manifestly bocker (=especially cute, per The Urban Dictionary), which helps to account (along with astute management by mothering Marie) for a flourishing career in show business.  See www.bocker.tv (especially the Press kit) as well as Facebook and Twitter sites. 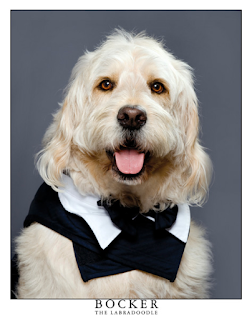 COMING TUESDAY, to a polling station near you: county and town elections, whose most conspicuous feature is a dearth of candidates.   Each GreeneLand voter who goes to the polls will be offered a ballot (to be processed electronically) enabling her/him/ them to participate in electing two State Supreme Court judge (for Judicial District 3), a district attorney, a sheriff, and two (!) county coroners.  The listed choices include four candidates for the two judgeships, two candidates for the two coronerships, and one candidate each for district attorney and for sheriff.
In addition, each voter will be offered  chances to vote on candidates for election to various town offices: supervisor, council member, judge, clerk, highway superintendent, tax collector.  The total of offices that are subject to election on Tuesday in GreeneLand is 84.  If each one were contested, then, there would be at least 168 candidates. But in fact there are 115 (plus about three avowed, active, write-in candidates).
On the printed ballots for Ashland, Athens, Durham, Halcott, Jewett and Windham, voters will find  precisely one candidate for each elective office.
In contrast, lively competitive action abounds in Cairo, with two contestants for supervisor, five for two council seats (one of them an incumbent who was refused re-nomination by her fellow Republicans), two for town clerk (the 12-year incumbent was not re-nominated by fellow Republicans, and neither was her husband, the outgoing highway superintendent), two for highway superintendent, and two even for tax collector.  Also loaded with actual choices this year is the New Baltimore ballot, presenting rival candidates for town supervisor, justice, council member (three candidates for two seats) and highway superintendent.  At the same time, a third candidate for highway superintendent has mounted a write-in campaign, as has a fourth candidate for town council.  (New Baltimore has been the scene over the past few years of extraordinary wrangling among as well as between co-partisans).
Meanwhile, in Catskill, Tuesday’s ballot names two candidates for town supervisor (both former town councilmen running for a currently vacant seat), three for two council seats, and two for highway superintendent.


ELSEWHERE.  The paucity of contestants for elective offices in GreeneLand marks a contrast with the electoral picture in nearby counties. Ulster County is experiencing a hot fight for the office of district attorney, plus contests in 18 of its 23 legislative districts.  Kingston city voters will encounter active choices between candidates for mayor and for most of the common council seats.  In Saugerties, voters get to choose between rival candidates for supervisor, for governing board and for highway superintendent.  In Dutchess County, voters are being stimulated to turn out on Tuesday by, among other contests, an intense battle for the office of county executive.   On the other hand, they will encounter just one choice for district attorney, sheriff, and county clerk.  Over in Columbia County, voters are being treated to the unusual spectacle of contests—not altogether peaceable contests—for district attorney, county treasurer, county judge and even coroner.  And Hudson City residents have been entertained, to an unusual extent, by the mayoral contest between Bill Hallenbeck, the Republican nominee, and Nick Haddad, the erstwhile nominal Republican who is the Democratic nominee and is supported more ardently by active Democrats than was his ‘regular’ Democratic predecessor.
BTW.  In the words of a Register-Star reporter--to use that noun loosely--it was the sight of “a need in his community” that drove a new candidate “to enter the political spectrum”).
ENDORSEMENTS of candidates for elective office used to be a standard, and influential, thing for newspapers.  That was then.  To be sure, the Albany-based TimesUnion did endorse candidates in competitive races for State Supreme Court Justice in two districts, along with a candidate for sheriff in one county, for mayor in one city, and for supervisor in two towns.  The Kingston-based Daily Freeman did bless three candidates--the incumbent Ulster County district attorney, a candidate for Dutchess County Executive and, half-heartedly, one of the four candidates for mayor of Kingston--but it offered no word on any other contest in its three-county area.  As for The Daily Mail and its sister paper, the Hudson-based Register-Star, their Saturday-Sunday (11/5-6) editorial enjoins us to “Take Diabetes Seriously” and their next editorial advocates voting.
(A Daily Mail scrivener did opine, on 11/4/11, in the guise of doing straight news, that “Since Coyne’s election” as Cairo town supervisor, “by most measures, the town has moved forward.”).
Seeing Greene also is devoid of endorsements.  But we do salute a proposal voiced by one candidate.  In a letter to The Daily Mail (10/27), Rick Hanse, would-be town councilman for Coxsackie, not only espouses the idea of greater transparency of  governmental deliberations, but also advocates specific steps to that end:  agenda of pending Council meeting to be posted on the town's web site in advance, so people know what topics will come up; agenda of Planning and Zoning board meetings also to be posted on line; tentative minutes meetings also posted, so as to allow for challenges or correction prior to formal adoption.  Mr Hanse also affirms, perhaps too hopefully, that the best thing for “positive direction” for a town is having “the greatest possible participation” of residents.
BUT ALSO, let's have a burst of write-in votes, at appropriate places, for Bocker T. Labradoodle.