MORTGAGE TAX HEAT. Local real estate agents are damning the eight county legislators who slapped a new tax—a 67 per cent increase—on property mortgages. Starting on October 1 (as reported in the 7/31 Daily Mail and confirmed by local realtors), borrowers must pay a tax of $1.25 rather than $.75 for each $100 of a new mortgage’s face value. Thus, a $100,000 loan attracts a one-time tax of $1250. The tax previously was 75 cents per $100 of mortgage value, and the revenue went to the State and to the relevant towns. The added 50 cents goes to county coffers. Two legislators, Forest Cotten and Sean Frey, voted against the new mortgage tax; four legislators were absent. The measure was needed, sponsors said, to offset expected losses of property and sales tax revenue. Local realtors contend, however, that the new tax is likely to deepen the property market’s current depression, shrinking the supply of taxable mortgages.

MOTOCROSS HEAT. Currently disputed around Durham is the desirability of establishing, on a site just off Route 145, in connection with a renovated Weldon House resort, a motocross track. Promoter Herb Fried contends (in letters to The Greenville Press and The Daily Mail) that the project would bring needed money-spending visitors to the area, that it is opposed by a “very small minority” of local people, and that it “may be the last chance to revive what once was a vibrant Durham.” Opponents claim (via lawyer Gerald Bunting) that the project would spoil Durham’s “pastoral, rural” character and that its sponsors, in collaboration with the county’s Industrial Development Agency (a prospective financial supporter) are trying to circumvent local permitting procedures. One opponent is innkeeper Richard Thomas Garvin of Erin’s Melody Inn. He questions (in Greenville Press, 7/23) Mr Fried’s assurances with regard to frequency of trials and races and invites neighbors to compare motocross events to the noise, from 9am on a Saturday to 9pm on a Sunday, of 50 chain saws.

BALLOT HEAT. Linda L. Overbaugh’s name will not appear on the ballot next month as one of four candidates to be Republican nominees for the four Catskill seats on the Greene County Legislature. It will not appear even though her name appeared, along with those three fellow Republicans, on nominating petitions signed by eligible citizens and timely submitted to the Greene County Board of Elections.

-----The exclusion was ordered today (Thursday, 8/6/09) in Albany. Supreme Court Judge Richard M. Platkin “ordered and adjudged that the designations of Linda L. Overbaugh on the Republican Party and Conservative Party petitions filed with the [Elections Board] as a candidate for the Greene County Legislature for the First Legislative District at the…primary election are declared invalid, null and void”; accordingly, the Elections Board “is restrained from printing and placing the name of Linda L. Overbaugh” on that ballot…”

Judge Platkin rendered his decision in response to what he took to be legal implications of the fact that the person identified on Republican and Conservative petitions as Linda L. Overbaugh, of 8 Willis Avenue, is the wrong Linda Overbaugh. She is not Linda H. Overbaugh of 5606 Cauterskill Road, her former cousin-in-law, the Catskill Chamber of Commerce’s executive director, the announced candidate for election to county office, the Linda Overbaugh who welcomed Republican endorsement and hence inclusion in the party’s designating petitions (which Linda L. signed, believing it was for Linda H.).

Triggering Judge Platkin’s ruling in this matter was a legal action brought by local Democrats. For this purpose Patricia J. Ruck, who chairs the Town of Catskill’s Democratic Party Committee, adopted the Citizen Objector role, while Forest Cotten, past Catskill Democratic chairman and present candidate for re-election to the county legislature, was designated as Aggrieved Candidate. Through attorney Kathleen O’Keefe of Earlton, they petitioned for a Supreme Court ruling that the erroneous identification of Linda Overbaugh nullifies the eligibility, for designation on the September primary ballot, of all four candidates whose names appeared on those petitions. Thus, Keith W. Valentine, Karen A. Deyo and Joseph F. Izzo also would be excluded along with Linda L. Overbaugh.

This contention, said the judge, was grounded on a “claim of pervasive fraud” which was rooted in allegations that “Respondent [Linda L.] Overbaugh never…consented to run for Office” (true) and that “party members who signed the petitions were misled into believing that Respondent Overbaugh”--Linda L., not Linda H.--“was running as part of a slate with the other three respondent-candidates” (tenuous). Moreover, “petitioners alleged that signatures continued to be collected [for the slate] even after Linda H. Overbaugh advised the local Republican Party chair that her middle initial and address had been incorrectly set forth on the designating petitions.”

The judge refused to construe “an unintentional error” along with Republican operative blundering as proof of “pervasive fraud.” Given “the unique facts and circumstances of this case,” Mr Valentine, Ms Deyo and Mr Izzo earn “the presumption of validity that attaches to designating petitions..." Their names shall appear on the Republican and Conservative primary election ballots.

All three will be nominated, since there are four seats to be filled. In the meanwhile, Mr Cotten will be unopposed in the Democratic primary. Consequently, it now appears that in the November general election, in District One, there will be no losers; four names will appear on the ballot as candidates for the district’s four seats on the county legislature.

------ That projection may be premature. In the words of Linda H. Overbaugh, as told to Seeing Greene, “it’s not over.” MERMAIDS WANTED, "young, old and in-between" says recruiter Fawn Potash, for bedecking a featured float in August 22'd Quadricentennial Parade in Catskill. Pedallers also are wanted, for the bike parade component. Info: 719-8244. 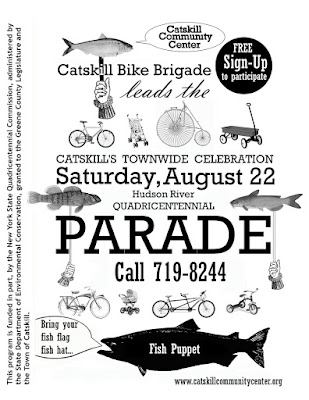 ARTISTS WANTED, to create Hudson-themed pictures on signboard for display on the south wall of the restored warehouse at Catskill Point, as part of Quadricentennial festivities. Kits are available, and so are stipends for works whose designs pass muster. Deadline for design submissions is August 15. 943-3400 (=county arts council). ON SATURDAY (8/8), a resident or visitor could keep busy indeed in GreeneLand, starting perhaps with a farmers’ market (in New Baltimore or Catskill). Next could come “Preserving the Bounty,” a morning Agroforestry Resource Center workshop on drying, freezing or canning fruits and vegetables (www.agroforestrycenter.org). Subsequent choices abound: Coxsackie’s Riverside Festival, which goes from mid-morning to after dark (when fireworks commence). The art show at Twilight Park in Haines Falls.A puppet version of “The Legend of Sleepy Hollow” at the Doctorow Center in Hunter. The German Alps Festival, with appropriate food & drink & music, at Hunter Mountain for the whole weekend. Jazz guitarist Pete Wagula at the Athens Cultural Center, from 7pm. And downtown Catskill’s ‘Second Saturday’ festivities, which on this occasion include strolling musicians, wine tasting, a cat race, a book signing (Richard Philp, Catskill Village, at Hood & Co.), a new show of Hudson River landscapes (five artists at The Galleria, 23 Main Street), Harold Hanson’s close-out sale at Verso, a concert at Union Mills Gallery (the Community Orchestra playing Renaissance dance music plus