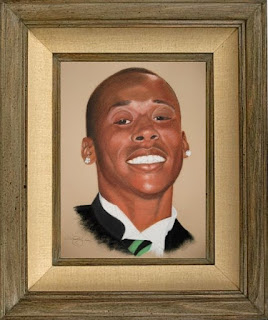 This posthumous portrait, painted by a teacher, Tee Jay Jones, was given to Victor’s parents, Ernest and Jan Armstead.

PREMIERING this very night (3/20) in Hollywood, New York, and CATSKILL: “The Cake Eaters,” a “quirky, small town drama that explores the lives of two interconnected families as they confront old ghosts and discover love in the face of devastating loss,” as filmed right here two years ago. At 7pm and at 8:45pm in the Catskill Community Theatre. Moreover, after Saturday’s 7pm showing, director Mary Stuart Masterson will be on hand for a question-answer session.

COMING TOMORROW also in downtown Catskill are an exhibition of new Patrick Milbourn art (see www.mgallery-online.com ) and a free live music party (SuperStringZ jazz the classics) at Imagine That!

VILLAGE VOTERS put Mayors Andrea Smallwood and Lee McGunnigle back in office in Athens and Tannersville on Wednesday, while replacing Mayor John Bull with Town Councilman Mark Evans in Coxsackie. As reported yesterday (3/19) in The Daily Mail, Ms Smallwood out-polled challenger Ron Coons by just 303 votes to 259, and ascribed the narrowness of her margin to opposition scare tactics and (in reporter Susan Campriello's paraphrase) “misrepresented facts.” Her Democratic running mates, Tom Sopris (incumbent) and Bob June, won Village Board seats by more comfortable margins, 302 and 308 votes to 221 and 202 for Republican candidates Richard Green and Arlene Halsted.

------In Tannersville, the voters who participated in the Village backed Mr McGunnigle by 71 votes, while giving 11 write-ins to former mayor Gina Guarino. They also went through the motions of returning unopposed incumbents Anthony Lucido and Gregory Landers to the Village board with, respectively, 70 and 65 votes.

------In Coxsackie, as reported in The Daily Mail, voters who turned out for the Village election gave Mr Evans 453 votes to 221 for Mr Bull, while also giving unopposed incumbent trustees Stephen Hanse and Greg Backus 537 and 528 votes. Judging from remarks quoted by reporter Billie Dunn, co-operation between local Democrats and Republicans shaped the election’s results, which laid the foundation for a period of comity between Village and Town leaders.

SELECTED to add her public health expertise to the battle against AIDS and other critical diseases in Africa: GreeneLander Deirdre Astin (aka Deirdre McInerney). Having accepted a three-month assignment with Global Health Partners, a U.S. government program, she will join a team of experts providing technical assistance and training to regional laboratories in the health care system of Tanzania. Her departure in May, however, will leave a gap. Since her husband, John, works in New York City as a psychotherapist on Mondays through Wednesdays, and there are two boys (16 and 11) at home in Athens, live-in household help is needed. Prospective helpers are invited to make contact at macastin@aol.com.

SENTENCED by County Judge George Pulver Jr, to State prison for a term of at least seven years, for abusing young girls sexually: Dennis M. Johns, formerly of New Street in Catskill. One victim was under 15 years of age at the time; the other was under 17. The age difference affects the gravity of the crimes. Second-degree rape and oral sexual intercourse win an extra year of hard time each relative to third-degree felonies.

*A ground-breaking ceremony was held on Monday for the Empire Merchants North liquor distribution warehouse that is slated for construction—250,000 square feet on 21 acres, at a cost of $28 million—in the Kalkberg Commerce Park in Coxsackie. Employees would number 360. Many of them already work at the current EMN warehouse in Kingston. (Daily Mail, 3/17/09; I.D.A. news release, 3 /15/09).

*Bank of Greene County‘s “merchant bank card processing business,” according to a statement from the parent Greene County Bancorp, Inc., has been “transferred” to a company called TrasnFirst LLC, for “a cash payment of $1.65 million.” The buyer “will continue to provide merchant bank card processing to merchant customers of the Bank but will now bear the costs, responsibilities and associated risks of administering the processing service.” The deal does not pertain to depositors who get Master, Visa or other credit cards through the bank. It relates to the 600 merchants who have used the bank, at the cost of a fee, to process payments made by their customers using credit cards issued by many banks.

*Port Of Call is owner Frank Guido's name for the restaurant he will (re)open, come spring or early summer, at Historic Catskill Point.

*Anything Works is Patrick Reith’s name for his recently licensed business in Oak Hill.

*Amy Serrago, the luscious, vocalizing component of Nite-Time, the party band, has launched a wedding planner blog: http://weddingsingersguide.blogspot.com. For evidence of wit as well as experience, see the Pre-Nuptial Syndrome text.

*ELCO, the electric boat company in Athens, seems to be altogether defunct. The story may go something like this: Robert J. Lievense of Beaufort SC, former president of the A.C. Nielsen audience rating company, bought into the firm, forced out partner Charles Houghton, borrowed money from a semi-governmental Village fund, sold not a single boat, lost $3.5 million or thereabouts. Pathetically, a company web site still exists: www.elcoelectriclaunch.com

* Unemployment in January soared to 14.1 percent of the labor force, anincrease over December’s already huge 11.2 per cent and the January 2008 figure of 9.2 per cent. In Greene County, TENNESSEE.