In the blog, 246 days ahead of The Event, we predicted that

a majority of Americans who vote in their national elections will choose, for the office of President of the United States, Barack Obama. In popular votes and State electoral votes received, Senator Obama will out-poll his main rival, John McCain, by an unusually big margin. 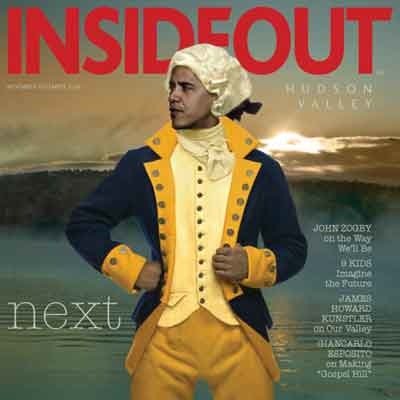 This picture of Barack Obama garbed as George Washington occupies the cover of the current issue of Athens-based InsideOut magazine. It went to press before Election Day.

That prediction was voiced long before Senators McCain and Obama had undergone most of the primary election and caucus ordeals that eventually won them the Republican and Democratic presidentialo nominations.

In the same issue of Seeing Greene we predicted that in the United States Senate the Democrats' majority would increase from 51 seats out of 100 (counting Senators Sanders and Lieberman) to 56 or more. And "In the House of Representatives, too," we foretold, "the Democrats' majority, acquired just two years ago, will increase. The net gain will be at least 15 seats, to 246 or more out of 435." Moreover, for New York State we predicted that all three of the Democrats who had captured Republican-held House seats in November 2006 would be re-elected, that at least one more Republican-held seat would fall to a Democratic nominee, and that in the State Senate, "the Democrats will pick up the one...seat they need in order to break the long-established Republican control of that law-making body."

Those predictions and the other ones, we claimed, were not based on tea leaf readings or on the configurations of birds' entrails. They were based on appreciating the electoral implications of already-established facts as well as on plausible guesses of what forces would be added in the ensuing days.

P.S. Equally prescient was our package of predictions about the elections of 2006: "...a major political shift. The Democrats will...pick up half a doze governships. They will gain five or six seats in the U.S. Senate. They will gain an outright majority in the House of Representatives, with seats to spare. They will pick up scores of State and local offices that currently are held by Republicans." But that compound forecast (Seeing Greene, 8/29/06) was made only 70 days ahead of Election Day.