According to an “advertorial” that popped up recently on some GreeneLand computer screens, a Catskillian named Kelly Richards has been making $6397 per month “working online”, part-time, from home.That is the gist of a “New York Job Report” concerning “Google Work At Home Programs.”The Report emanates from “Online News 6,” whose narrator says “I read Kelly's blog last month and decided to feature her story in our local job report. In our phone interview she told me her amazing story. ‘I actually make about $5,000-$7,000 a month using Google [although] I only work about 10-15 hours a week from home.’" 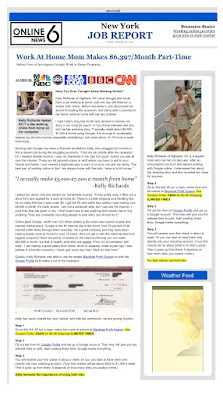 “I asked her about how she started her remarkable journey. ‘It was pretty easy, I filled out a short form and applied for a work at home kit. There is a small shipping and handling fee…. I got the Kit and within four weeks I was making over $5,000 a month. It's really simple…. I post links that are given to me, I don't even have to sell anything and nobody has to buy anything’.”

The narrator/reporter goes on to dwell on the scale and quality of Google as a company, to warn about on-line “scams” touting big returns, and to provide links that give access to ordering the lucrative Google Profit and Black Belt Profits kits.

To see the full text of the advertorial in legible size, click on the advertisement.It runs down through a series of ostensible comments and then through some small-print stipulations.Getting back out of the invitation requires a special step:with your cursor on the ad, click your Delete button; instead of exiting the site, you will be offered a choice between Cancel and OK; click OK.

Some features of this Advertorial are remarkable.Additional matters come to light after a bit of on-line snooping.Thus:

*The sponsoring agency, “On Line News 6,” is site-less.

*The putative investigative reporter for “On Line News 6,” though writing in the first person (“I read Kelly’s blog…”; “I asked her….”), is anonymous.

*The reference to Kelly Richards’s blog is not accompanied by a link thereto.

*The posted “Responses For [sic] This Article” seem to be dated prior to its publication, and they are shielded from verification.

*The prices of the touted recession-busting kits are not shown. Tucked into the fine print, however, references to application fees and monthly payments, as well as s to “negative option” or “continuity billing” and “Active Credit Card.”

*The source of payments to be received from this kit-guided on-line work is not identified.Although the Advertorial contains a picture of a big-dollar check from Google, the recipient’s name blocked out and nothing is said about what service the payment is for.No actual claim is made that Google pays for services rendered by Kelly Richards.

*In the small print, readers are advised that

this site and the stories depicted above is to be used as an illustrative example of what some individuals have achieved with this/these products. This website, and any page on the website, is based loosely off a true story, but has been modified in multiple ways including, but not limited to: the story, the photos, and the comments. Thus, this blog, and any page on this website, are not to be taken literally or as a non-fiction story. This blog, and the results mentioned on this blog, although achievable for some, are not to be construed as the results that you may achieve on the same routine.

Those words are followed immediately by a change of voice, in which the sender ventures, in capital letters, to put words in the mouth of the receiver:

I UNDERSTAND THIS WEBSITE IS ONLY ILLUSTRATIVE OF WHAT MIGHT BE ACHIEVABLE FROM USING THIS/THESE PRODUCTS, AND THAT THE STORY DEPICTED ABOVE IS NOT TO BE TAKEN LITERALLY.

That stipulation may help to account for the fact that nobody named Kelly Richards lives in Catskill.It also may help to account for the terms of near-duplicate Advertorials that have popped up on the screens of people in various locations.These “reports” from “On Line News 6” vary by date and by the identity of the home town of “Kelly Richards.” In addition to Catskill, it would seem, Ms Richards resides in Cairo NY, in Highland NY, in Lompoc CA and Hayward CA, in Black Diamond WA, and so on--depending on the whereabouts of the recipient’s internet service provider
Posted by Dick May at 1:11 PM

That's exactly what I was wondering about. This just seemed too good to be true. I am a mother of two, and I work at a childcare center. I could always use some supplemental income. I found it really interesting that your Kelly Richards is from Catskill, which I assume is close to where you live. Mine was from Boone, NC, where I live.

Kelly is from O Fallon, Mo, You mean they Lied? Scum
Nancy

She musta moved recently from Amelia, Ohio. That is where she really struck it rich.

She is from Lakeland, Florida also.

This is super-similar to the teeth whitening "secret" a mom discovered and countless other "news"-worthy scams out there.

You're all wrong, Kelly is here in Michigan. In Dimondale to be exact,approx. 7-8 miles from where I live? Wow I definitely need to try this. If she can do it in all these places at once,I can surely do this from my computer.Be back when I receive my first check.AAAHAHAHAHA!

No no no no. She is from Paducah, Kentucky and recently lost her job. Poor thing. Sounds like she might be making big bucks though if people send in the shipping charges. Hey, $4.00 here and $4.00 there can add up.

Sorry, you've all got it wrong, Kelly is a die hard Steeler fan from Pittsburgh, just like me of course.

She also lives in Highland, IL. I love the comments that have been posted to this article too- some of them have the exact same wording.

Kelly also has properties in Davis, CA and Sacramento. No wonder she has houses all over the country - she makes $5,000.00 with only 6-4 hrs of work weekly.

Guess what??? She's right here with me! The perfect place - Las Vegas AKA "Sin City"!!! What comes around goes around - she'll get hers one day!

Mick in the UK here.
Your all wrong, because Kelly is from Bristol UK as this advert has now reached here.Bit of a con really.They are asking for £1:95 and then it takes you on to an American site asking for $29:95 (after 5 days free)a month....I don't think so

She is from Hesperia, Ca. Wow she certainly does get around.

Actually she lives about 3 miles from my house in Mentone, CA. The way this girlmoves around the real estate people must be making a fortune from her!!!!

No media whatsoever has covered this money-making scheme - another lie. It is just a way to get your bank account number and charge you until you cancel this bogus money-making scheme. Btw, the ad also claims Kelly Richards lives in Mission Viejo, where I live. I cannot believe the feds don't go after these scammers.

Apparently Kelly is in Hampton, Va too. I'm contacting our local news channel they do investigations on online products and other scams.

Kelly is now visiting her winer home in Duluth,GA right outside Atlanta! Merry X-MAS and welcome!...NOT!

Of Course Kelly is from Lakeland Florida. It must be true because our Local newspaper has the link, and I am sure they checked it out before posting it on their job site YEAH RIGHT! If it sounds too good to be true it probably is. We need to ask ourswelves if there is so much money to be made why would they need us they could hire someone from India for a few dollars a day.

That is crazy! My computer said she is from Huntington, UT. But the funny part is - this is a very small town, and I actually know Kelly Richards from here. She manages a convenience store! I'm going to ask her about this tomorrow!

Just saw the identical article. Kelly is back in Amelia, Ohio. It looks like she may have been down on the river with her daughter based on the photo posted. Also, we better all act fast....there was a notation that the deadline is March 4! I bet the deadline changes as frequently as "Kelly."

If it sounds too good to be true, it usually is.

Nope... Kelly is from the UK !! How is this allowed to happen ? why aren't these scams regulated by someone ? Just another example of decent people getting conned out of parting with money they can ill afford to lose or waste !!

No, Kelly lives in Centerville, MA
How about that!!

I knew something was fishy after scrolling through the comments. Two identical comments, one by Mark and the other by Mike: "The timing of this couldn't be better, my wife and I are struggling too and this could be our answer." Hmm. Looks like the people running this site were a bit sloppy - and couldn't even use proper grammar while they were at it!