“DAZZLING” will do as a characterization of the July/August issue of InsideOut magazine. The thrills in this “second annual Art issue” from Athens-based publisher Owen Lipstein begin with the cover: Pete Seeger in the foreground of a Hudson landscape by Jasper Cropsey. That is just the latest in a series of brilliantly contrived InsideOut covers. Our shrunken copies of the two latest covers do not do full justice to the originals. To see them as they deserve, click http://insideouthv.com, then find the Cover Archives link (down-screen on the left). After clicking Cover Archives, you’ll get a gallery of pictures. For full-sized views, left-click on each picture. (Then find the Subscribe link, and place your order). 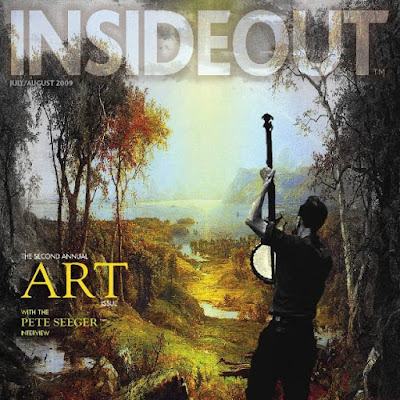 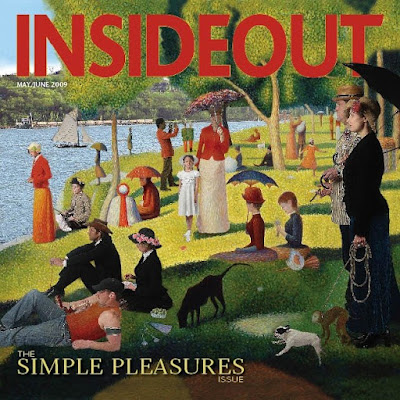 TOUTED to investors in financial sector stocks, by international tipster Jake Lynch of TheStreet.com : Catskill-based Greene County Bancorp, parent of the Bank of Greene County, "a full-service bank offering retail, commercial, municipal and investment-management services in upstateNew York. [We] upgraded the stock to 'buy'in October, when the financial crisis was starting to mushroom. Since then, the company has maintained resilience in its asset qualify.Fiscal third-quarter revenue, in the three months through March, increased 9.3% to $6.74 million, and earnings per share jumped 75%. Greene County's financial position remained strong, as reflected by a cash balance of $21.4 million and just $19 million of debt obligations. The shares are cheap on the basis of earnings, sales and cash flow in the thrifts and mortgage finance industry. With a price-to-earnings ratio of 15.4, Greene County is 63% cheaper than its average peer. The stock offers a dividend yield of 4.74%, well above the 3.2% average of the S&P 500 Index. Greene County [Bancorp] has risen 37% this year, outperforming the Dow Jones Industrial Average, S&P 500 and Nasdaq.” Bank officials here confirm the cited numbers, and foresee an even better earnings report for the April-June period. Moreover, continuation of quarterly dividend of 17 cents per share (for owners other than the parent company) was announced yesterday.

TOUTED in the July-August issue of American Art Review: “River Views of the Hudson River School,” an article, amply illustrated, by Elizabeth Jacks, executive director of the Thomas Cole National Historic Site. Ten years ago, Ms Jacks recalls, the home and workplace of Cole “stood in ruins.” It was “shedding roof shingles with each gust of wind,” the porch was “too dangerous to walk on,” water from burst pipes filled the basement. The daring rescue led by Raymond Beecher paved the way for a “meteoric rise.” People now are learning anew about the man whose approach to art once dominated American “visual culture” and who shaped distinctive American “ideals and assumptions”: “equating nature with a divine presence, …awe for America’s natural wonders, and belief that America is something of a Promised Land.”

MOTHER SUES DAUGHTER? Yes, but. Marilyn Stefans is co-plaintiff and her daughter Donna is a co-defendant in a court-ordered foreclosure auction to be held August 14th in the County Building. The target property at 61 Hunter Drive is called the Club at Hunter Mountain (but is not the once-flourishing Club Hunter that burned down). It includes a 10,000-square-foot clubhouse (now housing Milan’s Perfect Lift restaurant), a pool, and tennis courts on a five-acre site that is close to the Hunter Highlands condominiums. The amount of lien for the whole shebang, in consequence of debts dating from 2000, is a mere $295,000 or so. The sale at auction would extinguish a second mortgage obligation of over $500,000. The Stefans ladies are only nominally adversarial in the case. They are business partners, as Registered Rersentatives of Walnut Street Securities, in Woodbury NY.

DEPARTING from Main Street, Catskill, after four years in business, and after an ongoing sell-off (25-50% discounts) of choice 20th century decorative and artistic objects: Harold Hanson, his Verso gallery, his amiable sidewalk presence. Harold will continue operating his Hudson shop. (Also leaving Catskill at the end of August is Valley Dry Cleaners). ------

GONE already from Main Street in Catskill, after two years of never really settling in, is Tony De Vito, who operated, fitfully, next door to Swamp Angel Antiques, the Catskill Bookee. Tony did not manage to conclude his weekday New York City job as soon as he intended, we understand, and he was hampered by a crippling injury. His AllArtsMatter project, however, is still breathing in Greenville.

RETURNING? The empty BRIK gallery in Catskill, so spacious (2200 square feet) and curvaceous (top of the Main Street bend) could become an artists’ co-operative. The collaborators would display their work, sharing costs and sitting duties, keeping the proceeds of sales. That is owner Frank Cuthbert’s dream, as unfolded in the July-August issue of Arts Alive. “My wine glasses,” says Frank, “are getting lonely.”

229=participants in last Saturday’s fund-raising gala for, and at, the Orpheum Performing Arts Center-to-be in Tannersville. The long-closed movie theater is well along the way to planned transformation into a state-of-the-art, 280-seat performing arts destination. Guests at the benefit organized by the Catskill Mountain Foundation quaffed cocktails and hors d’oeuvres in the theater, took part in silent and live auctions of choice items and services, then scattered to host homes for dinner.