SCOOPED OUT.. Catskill's new “peace, love and ice cream” parlor won’t be Scoop Me for much longer. That name, as it turned out, was taken. The new name for this annex to the MOD café is peculiarly apt:
"CATS' CAST HAILS CATSKILL CAT-TUE 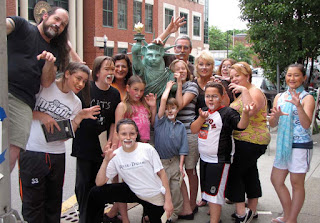 The musical "CATS," performed earlier this year at Catskill High School, will be performed anew this weekend at Columbia-Greene Community College. www.DragonFlyPerforming Arts.com

SEEING THOMAS. Meanwhile, an original play about the Catskill life of Thomas Cole, founder of the game-changing Hudson River School of art, opens tonight (6/19) night at Catskill Point, as written and directed by Joe Capone. www.greenetourism.com Further performances will be given Saturday night, Sunday afternoon, July 3, July 5, and the weekends of July 10-12 and 17-19.

HENRY HUDSON's voyage of discovery aboard the Have Maen, with his 18 men, "gave the Dutch a claim to land between the French areas to the north and English colonies to the south. In 1614 Fort Nassau, a trading post, was built near present-day Albany; in 1624 New Netherland was formed, the only 17th century colony in North America with a diverse population, and theonly one in which women had legal rights to own property." www.halfmoon.mus.ny.us

FUEL CHANGE.. This week, for the first time in recent history, regular gasoline could be bought in GreeneLand for less than the State-wide average. At $2.76 per gallon, the adjacent Hess and Cumberland Farms stations across from Catskill Commons charged less than the State average of $2.82. At about the same time, the nation-wide average on regular was $2.69, the East Coast average was $2.66, and the California average (noted here just to make us feel better) was $3. Elsewhere in GreeneLand, the two bridge approach stations were charging $2.81 (Citgo) and $2.82 (Getty) while full-service Cenco (=Haines Tires) on Maple Avenue was at $2.80. Meanwhile, we duly note that the deal advertised by Price Chopper—insert your Advantage card in the slot at a Sunoco pump, get a 10-cent discount on up to 20 gallons if you’ve spent $50 or more with the card—really works. What is more, Sunoco’s habit of charging more than GreeneLand competitors seems to have been reversed. At two Sunoco stations here, the posted prices of regular gasoline were $2.68 and $2.69.

IN TANZANIA. “Sister R, Sister A and another nun were mugged on their way to church early on Sunday morning…, knocked over for the few shillings they were carrying for the collection plate. You would think nuns (and they are all in their 70's) who have devoted their lives to caring for the country's afflicted would be immune to being preyed upon, but they have to live in a walled compound and keep dogs to patrol the yard just like any other mzungu who live out here.” --from GreeneLander Deirde McInerney’s notes in connection with organizing medical care in Tanzania.

CHEATING? When she copied off another student’s test paper, says little Danae in the comic strip Non Sequitur, she wasn’t cheating. She was “information gathering” as part of an “enhanced studying program” that is “results-oriented, geared to produce the desired bottom line of test scores.” Punitive detention makes her “a victim of student rendition.” Instead of repenting, she plans “to get a lawyer” to “justify what I’m doing.” That would be consistent with Daddy’s wish that she “act more adult.”
Posted by Dick May at 12:25 PM