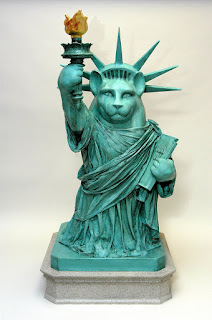 INS OUT. The 852 voters who turned out for Tuesday's Catskill Central School District elections chose new candidates for Board seats over incumbents. With three seats to be filled, Beverly Cotten (464 votes), Jennifer Osswald (456) and Kevin Allen (407) out-polled Board member Eric Holsopple (358) and Board President James Garafalo (313) as well as newcomer Justin Somma (215). That result coincided with overwhelming support (607-266) for the proposed $37million district budget (as well as support for the Public Library budget). Our sources had anticipated that if Mr Garafalo and Mr Holsopple were defeated, the proposed plan of expenditures for 2009-10 also would be rejected. Instead, the participating voters responded to complaints, voiced by some teachers and staff members, to the effect that the Garafalo-led Board supported unduly heavy-handed District governance. ----The Catskill result resembled what took place in two other GreeneLand school districts. In Hunter-Tannersville and Cairo-Durham, voters gave substantial support to the proposed 2009-10 budgets but not to incumbent Board members. Eric Thorpe out-polled Board President Brian Wilson, 395 votes to 178, in H-T, while in Cairo-Durham, although Board President Carl Kohrs won re-election, Board member Christopher O'Connell lost his seat to newcomer Robert Criswell. -----In GreeneLand's other school districts--Coxsackie-Athens, Greenville and Windham-Ashland-Jewett--the budget proposals won heavy popular support and so did incumbent Board members who sought re-election. -----In all six school district elections, the participants, as usual, made up fractions of the eligible voters. The fractions were larger in Coxsackie-Athens and Cairo-Durham than in Catskill. -----(Most of the hard facts cited above were drawn from The Daily Mail and The Daily Freeman. People who operate those newspapers managed to get the election results and deliver them in print by Wednesday morning when the polls closed late on Tuesday).

DIG IT. Catskill's Garden Clubbers wish to identify, photograph and reward extraordinary new or improved gardens. Prizes of $50, $100 and $150 will be conferred. To play the game, take a Before picture soon of a target site, then get to work and in August take an After picture. Deadline for submissions is September 1. (518)943-1971.

THAT MUSICAL. "River of Dreams" opened last Friday night in the Catskill High School auditorium and won huge applause along with plentiful sentimental weeping. For good reasons. Fifty GreeneLand school kids celebrated the Hudson River, in keeping with a book written and illlustrated by a local notable, by means of songs composed by a local artist, under the supervision of a GreeneLand-based Hollywood/Broadway veteran. The project is the subject of an incipient documentary. Performances willtake place Friday and Saturday nights (from 7pm) and Sunday (from 4pm). Admission is free. Be early.

PORT OPEN. Restaurateur Frank Guido, tired of leasing his 1 Catskill Point property to luckless and/or hapless operators, is directly in charge of the newly named Port of Call there. A "pre-grand opening" party on May 13th brought in a huge crowd, and business has been brisk ever since, at least for dinner.

DRUG BUST. So this GreeneLand woman goes in ex-husband's house, in keeping with share-the-children agreement. Spots a sack of cocaine, which reminds her of why she divorced Ex. Pours it down toilet. Flushes. Tells him what she has done. But it wasn't his property. Owner comes to retrieve $40,000 (market value) stash. "Sorry, " says Ex, who then gets busted--in nose, mouth, eye, knee, crotch….

About "drgu bust". Sounds like typical wronged Greeneland woman behavior (honestly, it's not limited to one place)

Cats up? From May? Dick you're getting old. Shouldn't there be an updated article regarding the plaster pussies that Vinnie insists on selling each year? President pimp?

How about a poem for your site? It's GreeneLand at its best or at least a well-deserved poke at its finest:

(sung to the tune of the Beverly Hillbillies)
Come hear a story we hope you won’t dread,
About a woodchuck boy just trying to get ahead.
Then one day, through political posturing that was crude,
He rose to fame on the back of his boss - how rude.
DWI that is, moonshine, Long Island iced tea.
Next thing you know he’s dancing on personal rights like Fred Astaire,
Making citizens afraid to tell him to “move away from here.”
Saying “Holcott is just your cup of tea.”
So they moved him on up the mountain to the land of trees.
Pines, it is, filled with bear under the stars.


That’s the story of country living gone wrong;
Carefully written in a song.
To keep you from harm in this community,
Full of bucolic charm and needless tragedy.
Country living, you see; have a beer, throw out your razor.
Hurry along now, y’all.