MET MISTAKE. At the Metropolitan Museum of Art in Manhattan, a painting in the American Wing is accompanied by a card declaring that the artist, Lily Martin Spencer, is “the only American woman painter of note in the antebellum [=pre-1860] period.” That misinformation was exposed definitively last weekend (5/1-5/2/10) by way of a special exhibition of paintings at the Thomas Cole National Historic Site in Catskill. Under the title “Remember the Ladies: Women of the Hudson River School,” landscapes by Harriet Cany Peale, Susie Barstow, Mary Blood Mellen, Julie Hart Beers, and seven other 19th century female landscape artists went on show. And on Sunday, the lives and times and techniques of those female artists—who climbed up mountain sides in corsets, high-heeled shoes and thick petticoats to capture scenic grandeur--were reviewed by the curators: Nancy Siegel, associate professor of art history at Towson University, and Jennifer Krieger, managing partner of Hawthorne Fine Art of New York City. A note about the show appears in the April 27 issue of Vogue, along with this picture of a Barstow landscape: 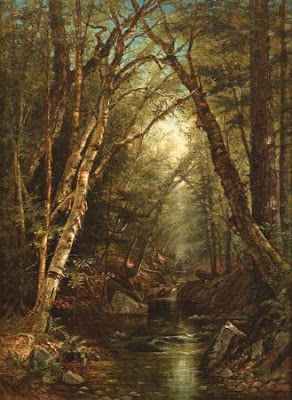 For much more on the story, with eight fine illustrations, see Ms Krieger’s article in the Spring 2010 issue of Antiques and Fine Art (or go on line to http://antiquesandfineart.com)

MOD MISS. Rumors that the MOD Gourmet Café in Catskill is about to close are false. Proprietors Mary DiStefano and Dana Wegener assure us that they expect to be there at least until their lease expires in a year. They have terminated breakfast service, however, and they won’t be running an ice cream parlor next door, as they did last summer. Meanwhile, they also will be running the kitchen at dinner time at Stewart House in Athens when that hostelry reopens in a fortnight or so, under new manager Reggie Young, perhaps under the new-old name Athens Hotel.

MISSING MALES. At Coxsackie-Athens High School, in the third academic quarter, 39 seniors achieved High Honors. Among those students of distinction, 14 are boys. At Hunter-Tannersville High School, of the 13 seniors who scored top honors in the latest quarter, two are boys.

MISFEASANCE. The governing trustees of Blueville are thinking about whether to change a yearly community event. They are thinking, specifically, about changing the event’s locality. To that end, they wonder about likely results and about what kinds of results count as benefits and costs. They reason that the relocation would be desirable if it is widely advocated by residents (and opposed by few), if it would reduce the event’s cost, if it would achieve a gain in public safety, if it would increase the event’s attendance and visibility, if it would enable the event to be a better spectacle, and/or if it would increase local trade. After gathering relevant evidence, Blueville’s trustees conclude that most of those beneficial results probably would come to pass. They rule in favor of the change in locality.

-------That fictive model of decision-making marks a radical contrast with recent proceedings by the governors of Catskill Village. At their April 26 meeting, the Trustees took up the question—posed weeks earlier, and discussed on various occasions thereafter—of whether to move the launching site of the traditional Independence Day fireworks show. Under consideration was the idea of moving the site from the St Joseph Friary, an eastern hilltop that has been utilized for some twenty years, to a spot that is closer to downtown Catskill.

-------Prior to that meeting, the Trustees had been invited by Seeing Greene to sketch the arguments favoring the change in location. They did not accept the invitation.

------- At the meeting, Village President Vincent Seeley initiated discussion of the subject by saying (disingenuously) that the idea of shifting the fireworks launch site had begun with concern for “public safety” and for promoting “downtown awareness.” He then invited spectators in the firehouse to address the subject—and “to keep it factual.”

------- The four spectators who responded did not endorse or oppose the contemplated switch. Neither did the three public officials who responded.

Mr Seeley then invited his fellow Trustees to address the matter. Not one of them explicitly endorsed or opposed the switch policy. Trustee Joseph Kozloski did say, however, that the contemplated move would put the launch site in “the middle of the Village,” closer to “the ones who paid for it,” and could be “worth a try.” Trustee Patrick McCulloch echoed the “worth a try” sentiment, but abstained, as did Mr Kosloski, from saying why. Trustee Brian Kehoe said “the safety concern weighs heavily with me.” (He was alluding to a potential traffic control problem arising from heavy traffic of motorists driving down Main Street to Dutchman’s Landing in order to watch the fireworks while picnicking along the Hudson River, and then trying to leave all at once). Mr Seeley then turned the meeting to other business.

After that business had been well under discussion, a spectator (this correspondent) ventured to ask whether the Board had made a decision on the fireworks launch site. Mr Seeley acted surprised—as if the answer was evident from the trustees’ remarks. The Trustees then proceeded to resolve formally that the July 4, 2010, fireworks shall be launched from a “downtown” site, “yet to be determined.”

-------That resolution did not stem from anything remotely resembling a systematic or comprehensive cost-benefit analysis. The Trustees acted without affirming, much less determining, that the change of launch sites would be popular, would be economical, would produce a net gain of public safety, would enable the fireworks to be more spectacular, would make the viewing population bigger, or would produce an increase in local business.

------- The Trustees also acted in the face of evidence that none of those results is likely eventuate. They knew, or were in a position to know, that:

*The proposed change of launch sites had elicited strongly-voiced opposition from some quarters and passivity from elsewhere.

*By keeping the launch site in the traditional place, they would have been able to achieve a cost saving over last year’s price.

*By putting the launch site in a near-downtown site, they would increase the risk of fire and the cost of liability insurance.

*Because of that safety risk, the fireworks show would of necessity be less spectacular (based on smaller “shells”).

*Relocating the launch site would reduce the fireworks’ range of visibility. The Friary site is the highest spot in Catskill. Using a more central, downtown launch site would not make the show more visible to more homes. It would make the show invisible to Catskillians who live on the eastern slope of the Village, to boaters who in the past have clustered on the Hudson in order to see the show, and to people who in past years have gathered, by the thousands, to watch the show from Dutchman’s Landing.

*The relocated launch site is quite unlikely to bring trade to downtown shops and restaurants. The fireworks will be launched after 9pm on a Sunday night, when most businesses normally are closed. Meanwhile, local residents will be able to see the show, as before, from home.

In deciding to use a downtown launch site for the fireworks, the trustees acted directly against advice, tendered unanimously, from the directors of the local Chamber of Commerce. (This could account for the inaccuracy, at the April 26 meeting, of Mr Seeley’s version of what considerations originally dominated talk about changing the web site. Instead of depicting trade-promotion as well as safety as early tentative arguments in favor of the switch, he substituted the phrase “downtown awareness”).

-------In short, the Trustees of Catskill Village almost made a controversial decision by stealth. And they made a decision without making a case.